Cookies help us deliver our services. By using our services, you agree to our use of cookies.

From eScience Wiki
(Redirected from SOCCOMAS)
Jump to: navigation, search 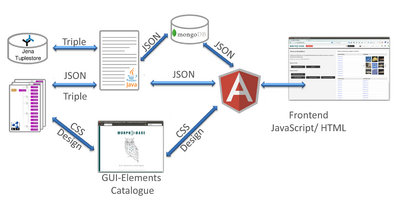 Overall workflow of the application. Left: Jena Tuplestore and the descriptions of data views and workflows in the application ontologies. Middle: the Java middleware and the CSS GUI-Elements Catalogue. Right: the Web application based on Angular.

Ontologies are usually utilized for representing knowledge. With our novel approach we extend the use of ontologies to control SOCCOMAS, an application for semantic Web-Content-Management-Systems (WCMS) that store their data as a knowledge base in a tuplestore.

Specific classes, individuals and properties of a set of application ontologies can be used like commands and variables that serve as an ontology-based language that is used to describe the graphical user interface (GUI), data representations, the user interactions, and all workflow processes of a semantic WCMS.

With the descriptive language of SOCCOMAS we define: 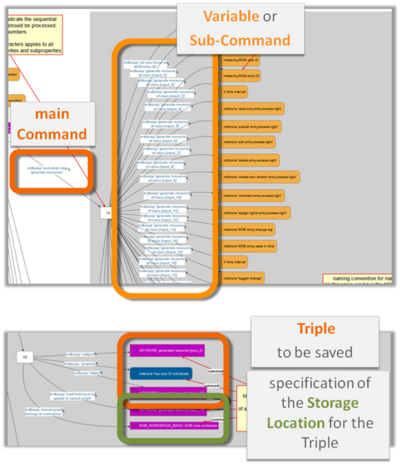 In addition to object and data property assertions for individuals, an ordered sequence of main commands (described in the form of annotations; see top), with each main command possessing a set of variables or sub-commands (described in the form of axiom annotations that often describe a specific triple statement and where it must be stored; see bottom) are used in the application ontologies for describing all individuals and classes involved in specific workflows, data views, etc.

SOCCOMAS will provide a one-stop framework for developing a particular semantic WCMS with a minimum of technical programming background required. This allows domain experts (i. e. experts on some subject matter) with no informatics background to set up their own semantic WCMS for collaboration with other experts through the Internet. Domain experts modify the application ontologies to define their own unique GUI and to define additional workflows for creating and managing their own individual data repository with minimum additional effort. We will develop a respective GUI for SOCCOMAS itself that will enable users to execute such modifications and adaptations without having to learn how to develop ontologies and use ontology editors such as Protégé or write Java code.

SOCCOMAS implements a set of default features that will be available in any semantic WCMS that is based on SOCCOMAS. These features may include::

Basic functions and features are implemented by SOCCOMAS and shared by all semantic Web-Content-Management-Systems (WCMS) driven by SOCCOMAS. This enables easy set-up of semantic WCMS for even small projects that usually have no funding for developing their own application. Within the limits set by the commands and variables known to SOCCOMAS, domain experts can customize their particular semantic WCMS to suit their own institutional needs. All customization is modular and may involve the specification of a particular look for the GUI (by specifying an own CSS-based GUI-Elements Catalogue), but also the specification of particular input forms and data views as well as particular workflows. Moreover, any third party can develop additional functions (e.g. implementation of analytic tools for refining the basic functionality and interface of an application) and make the corresponding new commands and variables with the accompanying middleware functionality openly available through additional application ontologies and libraries.

SOCCOMA's underlying modular architecture will enable development of new functions and adoption to new standards that could be implemented in all existing semantic WCMS by updating and complementing their respective underlying application ontologies as well as the corresponding libraries for the middleware.

The various data repositories that will be based on SOCCOMAS will be fully comparable in terms of cross-visualizing their data and metadata views (i.e. share basic data schemes for provenance, change-log, access rights, versioning, etc.), which is especially in the context of interdisciplinary research interesting. Because SOCCOMAS enables the inter-linking of different data entries within a WCMS, inter-linking possibilities can be easily extended to allow inter-linking of data entries across all WCMS that are run by SOCCOMAS. Moreover, import- and export-functions of data can be easily specified across WCMS, because they are run by the same engine and thus share the same application 'language', which their respective middleware can interpret. The semantic WCMS will also produce Linked Open Data as they are a) accessible and referable via stable URLs, b) linked to vocabularies and ontologies that express their meaning, c) amendable to open licenses as soon as they are published. When appropriable, the WCMS will leverage available Open Linked Data to serve tools like text annotation, geocoding and citation management. Users of WCMS based on SOCCOMAS are guided to interlink their data with existing resources on the Web or from other users.

Inter-linkage and Visibility on the Web:

Research institutions and museums such as the member institutes of the Leibniz Association have plenty of useful content that is often invisible to a broader community. It is very important not only to make this content accessible on the Web, ideally by using controlled vocabularies, but by adapting their Web pages to be part of a rich network of links as well. The most important metric in any discussion of visibility on the Web is the number and quality of links. SOCCOMAS will provide a general framework for easily setting links between the data of its various applications (see above). Based on such content linkage, semantic WCMS based on SOCCOMAS could contribute to the overall networking between information providers.

The composition, structure and functionality of each semantic WCMS’s graphical user interface (GUI) is also described and thus controlled through SOCCOMAS. As a consequence, changes of the basic composition of the GUI of a semantic WCMS instance can be conducted on-the-fly, which allows adopting the GUI of a particular semantic WCMS to user demands at any point. As a consequence, when the middleware has been set up, the particular GUI of the corresponding semantic WCMS can be developed through a user-centered design approach, by enabling the domain experts and thus the main users of the WCMS to adjust the GUI components without the intervention of software programmers.

SOCCOMAS will be provided as an open-source software package to which any third party developers can contribute “plug-ins” and “add-ons” as needed. These will be added to an existing framework by importing respective additional ontologies and their corresponding libraries.